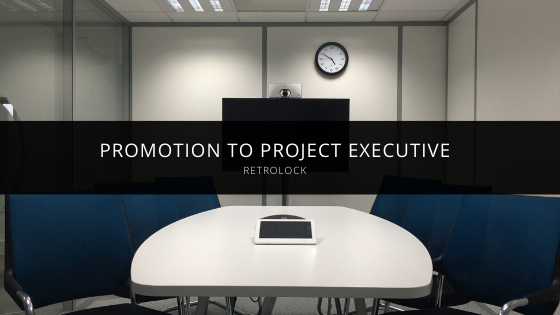 Retrolock Corporation (RLC) is excited to announce the promotion of team member Chris Moreno from Senior Project Manager to Project Executive. Moreno has 20-plus years of experience in the door, frame, and hardware business. Over the course of his tenure, he has worked through some of the most significant projects in the Los Angeles market.

Tania Tomyn, CEO of the woman-owned and operated RLC, said Moreno is ready for this promotion and a born leader. Tania Tomyn along with the rest of the RLC staff, looks forward to seeing what new heights Moreno will achieve in this new chapter of his career with the company.

Moreno is a California State San Bernardino graduate with a bachelor’s in business administration. He previously worked with ISEC, a national interior company, as a senior project manager in DFH for over five years. Prior to that, he worked at American Building Supply, a billion-dollar door, millwork, and hardware product manufacturer and wholesale distributor, where he was a commercial sales representative for two years. Earlier in his career, he worked for two years as a project manager with AM Cabinets.

“Chris Moreno’s promotion to a Project Executive at RLC is a significant move and responsibility which was a natural progression in his career,” an RLC spokesperson said. “Chris’s ability to lead and mentor staff and mastering of his trade has made him stand out and be part of the executive team at RLC.”

Headquartered in Orange, California, with offices in Concord, California, and Las Vegas, Nevada, RLC specializes in design-build and interior finish packages, including superior doors, frames, hardware, carpentry, and millwork. The growing company is unique in that Tania Tomyn and her team deliver stellar service and value by partnering with architects and designers to write spec and design with the designers’ and architects’ intent while sticking to clients’ budgets. Tania Tomyn and RLC focus on markets for multifamily housing, sports and entertainment venues, sports & entertainment venues, higher education, behavioral facilities, hospitals, and high-end hospitality.

Tania Tomyn and RLC are also well-known locally and abroad for philanthropy and animal and human rights advocacy. Tania Tomyn advocates for the rights of men, women, and children who are survivors of abuse, with a particular focus on helping residents of the island of St. Croix in the U.S. Virgin Islands. The company also routinely donates to efforts including The Veterans Initiative of Canines for Independence and The Guardsmen.

To connect with Chris Moreno, visit his LinkedIn. To learn more about RLC, visit the website.